There has been the rise of many singers in the world of Assamese music. Their voices and their music touch our moments and linger on. These immortal compositions lend us happiness.  Those creations of the lyricists and compositors bathed in the amorous voices often create a melodrama. Few days back my friends from Delhi, Anupam and Mrinmoy sent a collection of old songs. I cannot get tired of them even after repeated listening. I was elated. I have no words to thank them. Music- you give language to the heart! 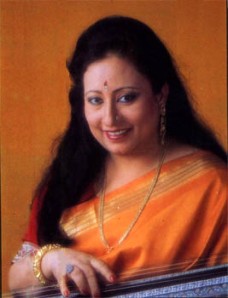 At this moment, I remember an amazing singer. Her voice still bemuses me. I get absorbed and fascinated listening to those songs.

One of the creations of lyricist Alimunita Piyar “Khoj Lahekoi Dibi Sokhi” with music by Birendranath Phukan was immortalized by the voice of Parveen Sultana in the early years of her musical career still strikes a chord for many. This song speaks in volumes about the emotional outbursts of a young girl who was to get married and leave her parents and go away to her husband’s family. The whole scenario is so well presented as one of her closest friends advices the betrothed about her new life.

Parveen Sultana’s husband Dildar Khan is also a classical singer of repute. She has performed at many places with her husband. She has sung for Hindi motion pictures and has earned accolades. Couple of her songs from the movie “Pakeeza”, namely “Kaun gali gaye Shyam” and “Hume tumse pyar kitna” are the top favorites of audiences.

Parveen Sultana’s singing bears a unique significance. Her correct and precise singing of Khayal, Thumri, Ghazal, Bhajan, Tappa and other classical songs and various singing performances has won the hearts of many music lovers. She has represented India at various musical events around the world. At the very bottom of her success lie the support and blessings of her father Ikramul Mazid and her husband Dildar Khan.

She currently resides in Mumbai. We as admirers expect new Assamese compositions from her.

Translation by Arunabh Sharma for enajori.com

This project is totally dedicated to make an archive of Assamese oldies. Use of the songs here is not intended as a copyright infringement on any of the artist or any other entity’s copyrighted material. As totally a non- commercial project, all the music present in this site is for Cultural Promotion and Information. If you believe that any material found on our Site has been used in a manner that constitutes infringement of your copyrighted work, please provide written notice to our Email ID info@enajori.com that includes the following information: (1) the signature of the owner or a person authorized to act on behalf of the owner of the Work that is allegedly infringed; (2) identification of the copyrighted work claimed to have been infringed; (3) a description of where the infringing material is located on the Site; (4) your contact information i.e. address, telephone number, and email address; (5) a statement by you that you have a good faith belief that the disputed use is not authorized by the copyright owner, its agent, or the law; and (6) a statement by you that the information in your notice is accurate and that you are the copyright owner or authorized to act on the copyright owner’s behalf. Please provide legal proof of your right to demand removal. If verified, material will be removed immediately unless permission is given for its use.
Loading Comments...
%d bloggers like this: